US singer Halsey threw all caution to the wind when she stepped out in this daring ensemble on Thursday.

The Bad At Love star, 23, was turning heads as she rocked up to the glittering, star-studded amfAR gala in New York.

Halsey, who joined a host of other famous faces on the night, left very little to the imagination in her risqué black dress that featured an eye-watering thigh-split running up the left leg. 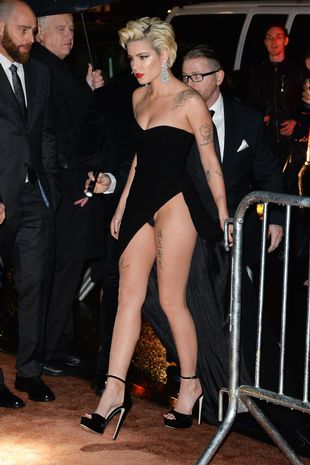 The singer was proudly showing off her impressive pins as well as her tattoos as she posed for pictures on the red carpet.

She teamed the dress with sky high black heels, huge earrings and brightened up the look with popping red lips.

When she took to the stage later in the night to perform she opted for another daring number - this time dressed in a plunging sequin dress that featured a sheer skirt and cut out panels around the waist.

Inside the bash, which was honouring director Lee Daniels and editor of W magazine Stefano Tonchi, Halsey was sat on a table with Taraji P. Henson, Maxwell, Adrien Brody and Heidi Klum.

And the German supermodel had clearly been swapping style tips with Halsey as she also opted for stunning dress that featured a daring thigh split.

The German supermodel shone in her strapless gown that was adorned with shiny blue beads, which she matched with her statement earrings.

A host of other stars were also in attendance, including Olivia Culpo, model Joan Smalls, actress Alexandra Daddario, Sienna Miller and Queen Latifah.