Director Barry Jenkins said he was “speechless” after his movie “Moonlight” was announced as the winner of best picture on Sunday night, following an unprecedented moment in Oscars history. And he wasn’t the only one.

“Is that the craziest Oscar moment of all time?” Emma Stone, winner for best actress, asked backstage. “We made history tonight.”

But what exactly happened that led to that now-infamous moment where “La La Land” was mistakenly announced as best picture at the Academy Awards?

Faye Dunaway and Warren Beatty – on hand to celebrate the 50th anniversary of “Bonnie and Clyde” – presented the nominees for best picture. On stage, Beatty was given the task of opening the envelope that was supposed to contain the winner. (Later, Beatty would say it contained the name of a winner, but not the winner.)

On stage, Beatty looked at the card and said, “And the Academy Award…”

The crowd laughed, assuming he was building suspense.

He looked down at the card again and then looked at Dunaway.

Dunaway playfully told Beatty, “You’re impossible.” She assumed he was joking around.

“Come on,” she prompted him.

He showed her the card, and Dunaway read it aloud.

As Platt spoke, viewers at home saw someone run across the stage behind him.

From the crowd, “Moonlight” star Mahershala Ali, a winner for best supporting actor, noticed the activity.

“When I did see security or people coming out on stage, and their moment was being disrupted in some way, I got really worried,” he told press backstage.

“I think all the movies that were nominated were worthy so I took the result,” he said backstage. “I applauded like everyone else.”

On stage, “La La Land” producers were approached by a man wearing a headset and holding an envelope.

Platt called producer Fred Berger to the mic next. As Berger began speaking, Beatty started heading to the mic, but Berger beat him to the announcement.

“This is not a joke,” he said, gesturing to the “Moonlight” cast and producers and inviting them to stage.

Platt added: “This is not a joke. They read the wrong thing.”

Horowitz showed the correct envelope to the crowd.

“I wanted to express to them that they had won,” he told CNN later. 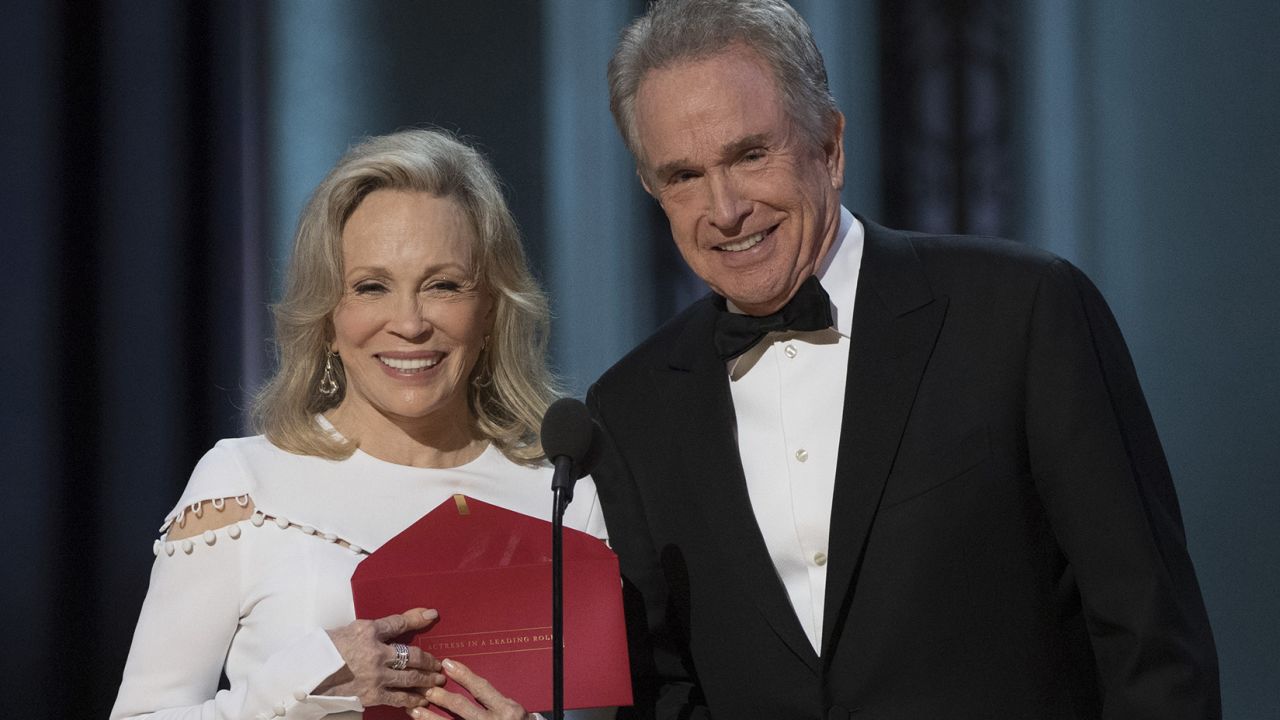 Jimmy Kimmel then hopped on stage and attempted to clear the air.

“I think you all should just keep it anyway,” he joked.

“It threw me more than a bit,” Ali said. “I didn’t want to go up there and take anything from somebody. It’s very hard to feel joy in a moment like that.”

As the “Moonlight” cast and creators headed to the stage, Kimmel said, “This is very unfortunate what happened.”

“I’m going to be very proud to hand this to my friends from ‘Moonlight,’” Horowitz interjected.

Beatty attempted to explain himself further.

“I want to tell you what happened. I opened the envelope and it said, ‘Emma Stone, La La Land.’ That’s why I took such a long look at Faye and at [the audience]. I wasn’t trying to be funny.”

Photos later confirmed that Beatty and Dunaway were accidentally handed the envelop containing the winner for best actress in a leading role.

Stone told press she was confused because she had the card announcing her win with in her possession “the entire time.”

Two partners from PricewaterhouseCoopers (PwC) – the accounting firm responsible for tabulating the results and keeping them confidential – prepare two briefcases with the envelopes used by presenters.

The pair stand backstage and hand envelopes to award presenters before they walk onstage. It was a breakdown in the final stage of this process that led Dunaway to announce “La La Land” as the winner

“This is ‘Moonlight,’ the best picture,” Beatty said.

“The presenters had mistakenly been given the wrong category envelope and when discovered, was immediately corrected,” the company said. “We are currently investigating how this could have happened, and deeply regret that this occurred.”

“We appreciate the grace with which the nominees, the Academy, ABC, and Jimmy Kimmel handled the situation,” the statement added.

Speaking to CNN’s Brian Stelter on Monday morning, Horowitz made light of the mistake.