Justin Bieber has done many cringeworthy things in his time - getting accused of egging his neighbour's house, enraging the entire nation of Argentina by trashing their flag and peeing in a restaurant mop bucket - and he hasn't stopped there.

Now he's been caught on camera forgetting the original Spanish lyrics to his hit song Despacito and just making up noises to fill in instead. 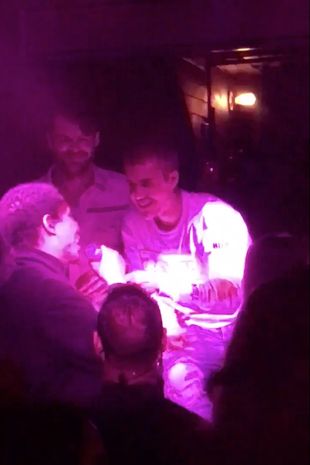 The 23-year-old pint-sized poplet was at 1OAK in New York on Tuesday night to perform his No1 track, which has been played so many times around the world that just about everyone knows the lyrics off by heart, even if they're not native Spanish speakers.

"Despacito," he sang into the mic, before everything went pear-shaped.

Members of the audience didn't look too impressed as he held the microphone out to them to do the hard work.

The Chainsmokers, who were also on stage at the time, looked at each other and laughed in what seemed embarrassment as Biebs took a deep breath and made a loud animal noise into the mic.

It comes after fans begged Justin to cancel his upcoming UK tour dates following the suicide bombing at the Ariana Grande concert in Manchester.

Bieber is due to play an open air concert at London's Hyde Park in July, but fans flooded social media saying his appearance should be axed for the safety both of fans and the singer himself.

"Cancel Justin's concert in the UK, please! We want him to be safe, please," a person using the handle @marhrukhh wrote on the Instagram account of the singer's manager Scooter Braun.

Braun also manages Ariana, also 23, a former Nickelodeon star whose huge female fan base, many of them tweens, were out in force for her concert in Manchester on Monday night when a suicide bombing killed 22 people and injured scores more.

The Problem singer flew to Florida on Tuesday to spend time with her family.

Touring has been one of the top sources of income for musicians in recent years. The top 10 worldwide tour acts grossed a combined $1.67 billion in 2016, according to music industry publication Pollstar, with Bruce Springsteen bringing in $268.3 million alone.

Pop acts like Taylor Swift, Justin, One Direction and Grande are also among the top earners. Grande grossed more than $25 million from touring between April 2016-April 2017, according to Pollstar figures, while the Canadian star grossed $163 million in 2016.

Robin Wolff, from Agoura Hills, California, said she has accompanied her 15-year-old daughter Brooke to Miley Cyrus and One Direction concerts. Her daughter has only more recently attended a couple of concerts without parental supervision.