While everyone else went crazy trying to figure out who 'Becky with the good hair' was, these stars decided to poke fun at the hotly debated lyrics.

First up was the number-one suspect Rita Ora, who cuddled up to Beyonce on Snapchat during last night's Met Gala, before donning a 'Not Becky' pin for an after-party. 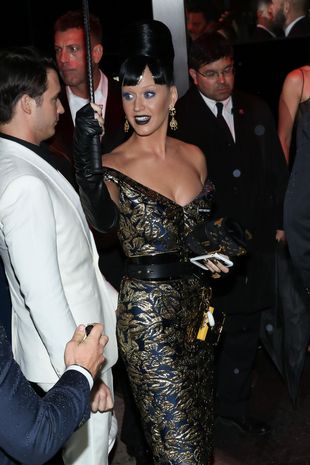 But it seems she wasn't the only could-be Becky who wanted to clear her name before the Beyhive attacked.

Arriving at the Standard High Line Hotel for a glitzy after-party was Katy Perry – who sported the same accessory on her floral gown.

So far, no one's accused the Firework singer of cheating with Jay Z. Instead it seems she was just keen to show her support for fellow singer Rita Ora.

We wander if they'll be dishing out those badges to Rachel Roy and any other potential Becky's...

Katy was rocking the futuristic look as she arrived at the star-studded party with boyfriend Orlando Bloom.

Wowing in a navy dress, embroidered with gold flowers, the 31-year-old singer even matched her make-up to her ensemble – with bright blue mascara and gold painted into her hair and on her nails.

Meanwhile, her new beau Orlando – who she's been dating since January – opted for a burgundy tuxedo jacket.

Earlier in the night, Rita Ora stepped out in a plunging PVC mini dress which bared her boobs for the after-party.

Instead, Rita would have been hoping people clocked the black badge on her left lapel which was emblazoned with the words 'Not Becky'.

The former X Factor judge has been at the centre of rumours she's 'Becky with the good hair' ever since Beyonce's Lemonade album dropped last weekend.

The explosive album appears to hint at husband Jay Z's alleged infidelities and Rita soon became the target of angry Beyonce fans who accused her of being the subject of her track Sorry.

Rita was forced to deny she was 'Becky' in a series of tweets.

"I never usually address tabloid gossip but let me be clear, these rumours are false," she wrote.

"I have nothing but the upmost respect for Beyonce. Let’s continue enjoying Lemonade."

And Rita proved she's definitely not Becky as she cosied up to Beyonce for a selfie on the red carpet at last night's event in New York.

Rita captioned the Snapchat video 'Family' along with a heart emoji.