The 40-year-old reality star stepped out in a very daring leather Balenciaga look which included a zentai face covering, before checking into the Ritz Carlton. 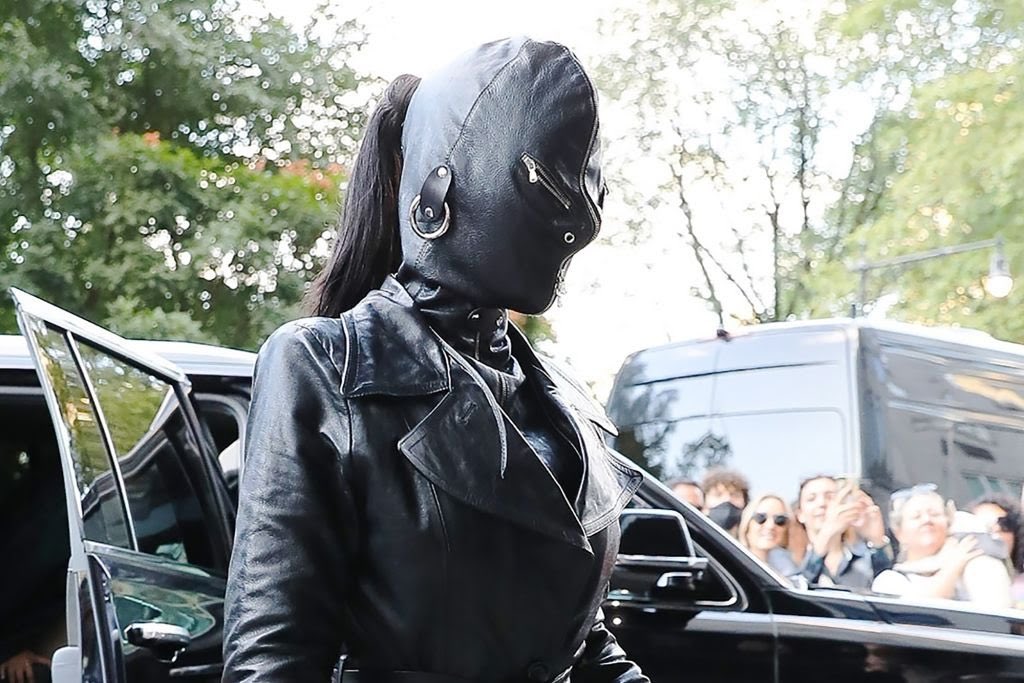 Joined by mom Kris Jenner, her partner Corey Gamble, sister Kourtney Kardashian and Travis Barker, the foursome arrived ahead of the Met Gala on September 13.

The SKIMS founder was seen stepping out of a black SUV in what looked to be a black leather body suit with a zipper up the front.

Though she usually loves to show skin and famously said in an acceptance speech 'nude selfies til I die,' Kim seemed to do a full 180 with her ensemble.

The bodysuit was layered underneath a leather trench coat and she sported thigh high black boots and gloves while carrying a sparkly Balenciaga bag.

Her face was completely shielded by the leather face mask which had a zipper up the front and two where the eyes would be, with only her long ponytail sticking out of the back.

The look seemed straight out of Kanye's playbook as in recent public outings and all of his DONDA listening events he appeared with his face completely shielded by a similar covering.

And as Kim continues to sport namely Balenciaga in recent weeks it seems likely that she will be dressed by the brand's designer Demna Gvasalia at the Met Gala.

She also famously donned a custom wedding dress fashioned by Demna during that memorable cameo at the DONDA event at Soldier Field in Chicago.

The Yeezy designer and Demna also collaborated on his three listening events as West tapped the Georgian-born designer to creative direct all the visuals.

And though she filed to divorce the rapper in February nearly seven years after marrying, Kim was recently said to be 'open' to rekindling.

'Kim is not rushing the divorce,' an E! News insider shared. 'She and Kanye are in a good place right now and she is not on a rushed timeline to push the divorce forward.'

The source continued to say: 'Kanye has expressed that he wants her back, and Kim is open to it, but wants to focus first on rebuilding their foundation and friendship back stronger.'

The twosome's last appeared at the 2019 Met Gala together, as the 2020 event was cancelled on account of the COVID-19 pandemic.

After Kim made her very head-turning entrance into the hotel, Kris and Corey were seen walking in ahead of Kourtney and Travis in much more casual outfits.

And based on the arrival of 'Kravis' it seems that the duo may be appearing at the Met Gala — which would mark Kourtney's first time going — as both she and sister Khloe Kardashian have never been invited.

Travis is also set to perform at the VMAs at the Barclays Center on Sunday, and it has been rumored that Kourtney is set to make an appearance per Page Six.

The longtime friends turned lovers flaunted their love all over Venice, Italy and attended a string of Dolce & Gabbana shows just weeks ago.

And their over the top PDA caused ex Scott Disick to shoot a snide DM to her ex Younes Bendjima which was aired publicly on Instagram.

Yo is this chick ok!???? Broooo like what is this. In the middle of Italy,' the message read, which set forth an unfortunate turn of events for the Talentless designer, as it was said Kourtney had plans to 'confront' him over the matter.

Very clearly still hung up on the mother of his three children, Scott's message caused his younger girlfriend Amelia Hamlin, 20, to break up with him.

'Amelia's done with Scott for now,' a source told E! News. 'She had had enough and it was time...Everyone knows she deserves better. She knows it too.'

Though only part of the family was seen arriving on Saturday, Kendall and Kylie Jenner have already been in NYC for the past few days.

The theme for this year's gala is In America: A Lexicon of Fashion and the event will be hosted by Amanda Gorman, Timothée Chalamet, Naomi Osaka and Billie Eilish, with Anna Wintour as an honorary chair.

With her focus on the Met Gala, Kardashian appears to have left the four children she shares with Kanye on the West Coast.

Just days before her NYC arrival, Kim informed her Instagram following that her five-year-old son Saint had 'broke his arm in a few places.'

While waiting for her little boy to see the doctor, the reality star snapped a photo of her second-born sitting in a wheelchair with an ice pack on his wrist. It's still unknown how the little boy sustained the injury.