She has been hot on the promo trail for her latest film.

And Kristen  Stewart put on an eye-popping display as she attended the Seberg premiere during the 63rd BFI London Film Festival on Friday. 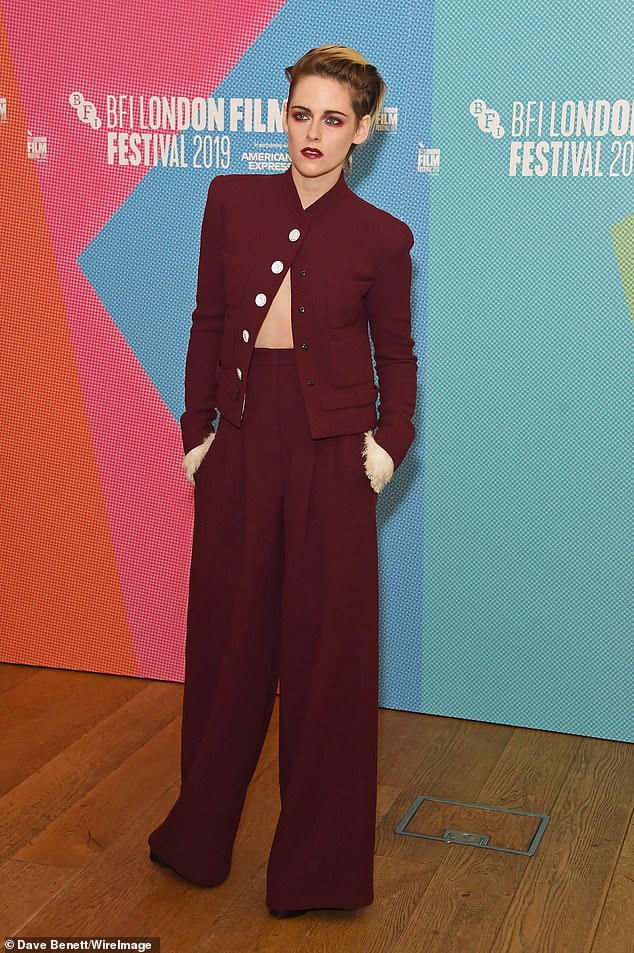 The actress, 29, teased her taut midriff and risked a wardrobe malfunction in an unbuttoned scarlet blazer adorned with white buttons.

The racy garment  threatened to expose the star's cleavage as she posed up a storm, pairing this with oversize culottes.

She wore her ombre crop in a dramatic quiff while plum shadow, liner and glossy blood-red lips made for a gothic make-up look.

Kristen takes on the lead role of actress Jean Seberg in the film, which follows the FBI targeting the film star due to her support for the Black Panther Party in the 1960s.

Movie icon Jean Seberg struggled with a difficult life off-screen leading to her 'probable suicide' in 1979.

The star, who spent much of her life in France, broke through as the lead in Otto Preminger's Saint Joan, but it was her role in Jean-Luc Godard's directorial debut Breathless (À bout de souffle) for which she is best remembered on screen.

During the late 1960s, Seberg provided financial support to various groups supporting civil rights, such as the NAACP, Native American school groups, and the Black panthers.

She became a target of the The FBI's COINTELPRO (Counter Intelligence programme) under J. Edgar Hoover, the project set up for surveying, infiltrating, discrediting, and disrupting domestic political organisations.

It planted a false story that the child she was carrying was not fathered by her husband Romain Gary, but by a member of the Black Panthers.

Kristen recently attended the Deauville American Film Festival in France where she was the recipient of the Talent Award.

French director Olivier Assayas paid tribute to Kirsten and, handing over the award, said: 'She never made a conventional choice, she never tried to achieve anything else but preserve her independence, in her life, in her acts and in her art.