Kristen Stewart isn’t just known for her brilliant acting skills but also her chic fashion sense. The 30-year-old has been a muse for various luxury brands and has recently grabbed eyeballs for her Chanel couture at the Paris Fashion Week 2020.

Stewart attended the Chanel Womenswear Spring/Summer event held at the Grand Palais in Paris on Wednesday. 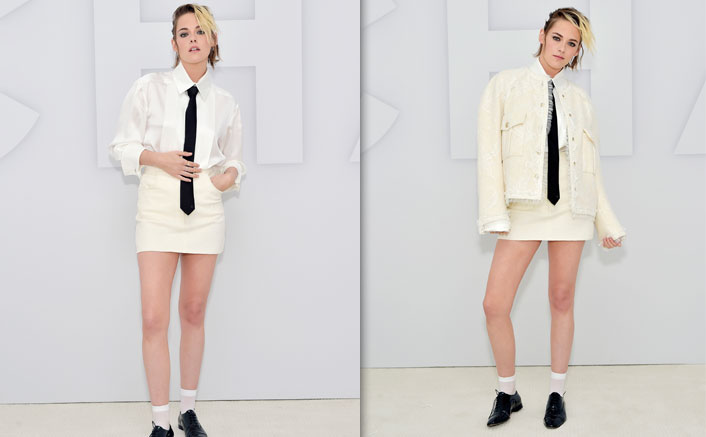 The Twilight star wore a cream-colored jacket with a white bird print and a sheer embroidered embellishment. Kristen Stewart wore a matching satin shirt inside and paired it with a matching mini skirt and a black tie.

For makeup, Kristen went for her signature look with bold kohl shimmery eyes and nude pink lips. The Twilight actress carried her blonde locks in a glamorous way!

Recently, Kristen Stewart spoke to Instyle magazine about playing a queer person offscreen and being same in the real-life too. Talking about her experience of being a part of Happiest Season, Kristen said, “It deals with very poignant things that, for me, are extremely affecting and triggering — even though now the word “triggering” triggers me more than anything in the whole world. (laughs) But the movie is so funny and cute, and I loved the couple.”

“They’re both people I really felt protective of in different ways, because I’ve been on both sides of that dynamic where someone is having a hard time acknowledging who they are and the other person is more self-accepting. I (personally) came into the more complex aspects of myself a little bit later. I never felt an immense shame, but I also don’t feel far away from that story, so I must have it in a latent sense,” Kristen Stewart added.

When Clea DuVall asked her if she used her own experiences while playing the role, Kristen added, “Yeah. The first time I ever dated a girl, I was immediately being asked if I was a lesbian. And it’s like, ‘God, I’m 21 years old.”‘