They have enjoyed two blissful years of marriage and are parents to two children, daughter Wyatt and son Dimitri.

And while it's usually their loved-up displays of affection that ensure all eyes are on them, Mila Kunis and husband Ashton Kutcher made sure to grab attention for different reasons as they stepped out in Los Angeles recently. 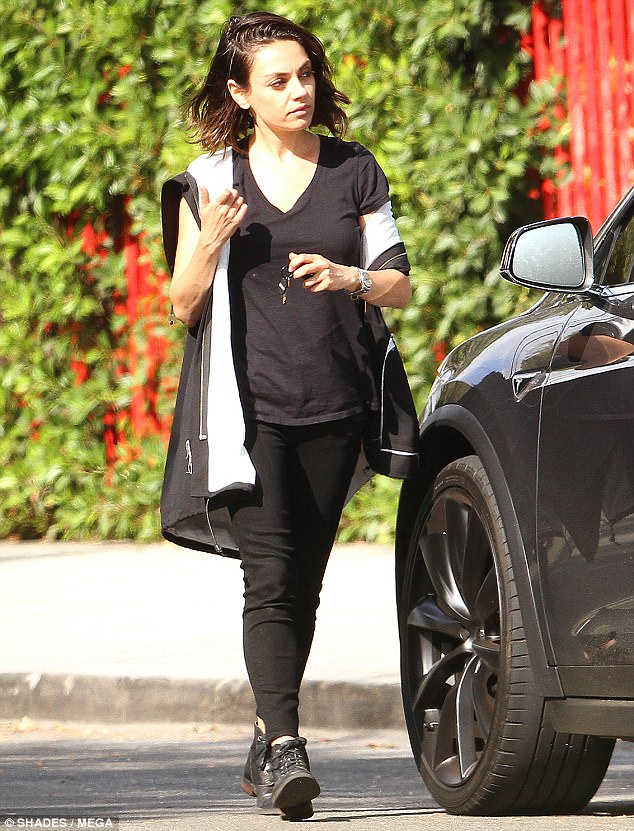 While Black Swan beauty Mila turned heads by forgoing her make-up and flaunting her natural beauty, her Two and a Half Men star beau fell victim to a wardrobe mishap as he bared his behind.

Despite her casual ensemble, Mila stunned for her low-key outing as she stepped out completely fresh-faced without her usual red carpet glamour.

Boasting a flawless complexion, the acting talent wore her chopped brunette tresses in a tousled style, swept over to one side, and favoured an all-black outfit.

She paired together dark jeans with a matching loose-fitted t-shirt and lace-up boots. Mila threw a sleeveless hooded jacket atop her attire, with the monochrome outerwear draping off one shoulder.

As she ran errands while heading out in Los Angeles, Mila was flying solo with her beau Ashton later seen making his way into his car, revealing a little too much as he did so.

The No Strings Attached actor was clad in a white t-shirt and jeans that despite including a grey belt around the waistband failed to stay up in position.

Shrugging below the star's hips, Ashton was undoubtedly left red-faced as his jeans fell down slightly, revealing his bare behind underneath.

Ashton appeared to be retrieving something from his car when the jean slip occurred and as he stepped away from the vehicle, the star seemed to be desperately trying to pull up his trousers.

His appearance in the Californian sunshine co

mes after wife Mila spoke candidly of the couple's parenting efforts in an interview with Entertainment Tonight.

Mila has been throwing herself into work since giving birth to her second child, Dimitri in November last year, with her upcoming movies including A Bad Moms Christmas - a sequel to her 2016 comedy movie Bad Moms in which she returns with co-stars Kristen Bell and Kathryn Hahn.

Addressing how she balances her working commitments with motherhood, Mila added: 'You're still stressed out and there's still the idea of the guilt of leaving your kids, but you know that they'll be OK.'