Take, for example, the strip of fabric that she tried to pass off as a frock at a concert on Sunday night. So small was the dress and so ample is her fabulous figure that the singer struggled to keep her assets under control. 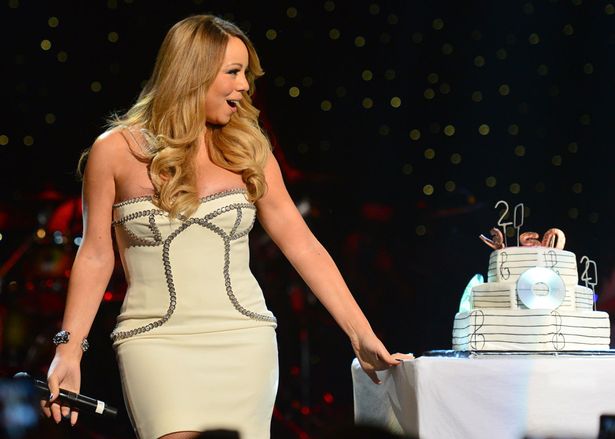 It was inevitable that Mariah was going to be the ultimate loser in the battle between her dress and her breasts, and her boobs finally made a bid for freedom, giving us a flash of just a slither of nipple in the process.

Mazza took to the stage in the white mini dress to celebrate hip-hop record label So So Def's 20th anniversary, which also saw the likes of Usher, Jay-Z and Ludacris perform.

To finish the evening, Mariah presented a (pretty lame by celebrity standards) cake to the label's founder, Jermaine Dupree.

The gig was no doubt a welcome night off from Mariah's American Idol duties.

The twelfth series of the US talent show is currently in full swing, and throughout we've seen Mariah constantly locking horns with fellow Idol judge Nicki Minaj - stressful for her, but brilliant television for us.

Whilst mariah just about manages to keep her body under wraps, one star who's letting it all hang out is Kim Kardashain, who's done a naked photshoot with Kanye West. Sure she has.