The 43-year-old beauty spent the first official day of fall enjoying a romp at the beach in Malibu, California on Monday. 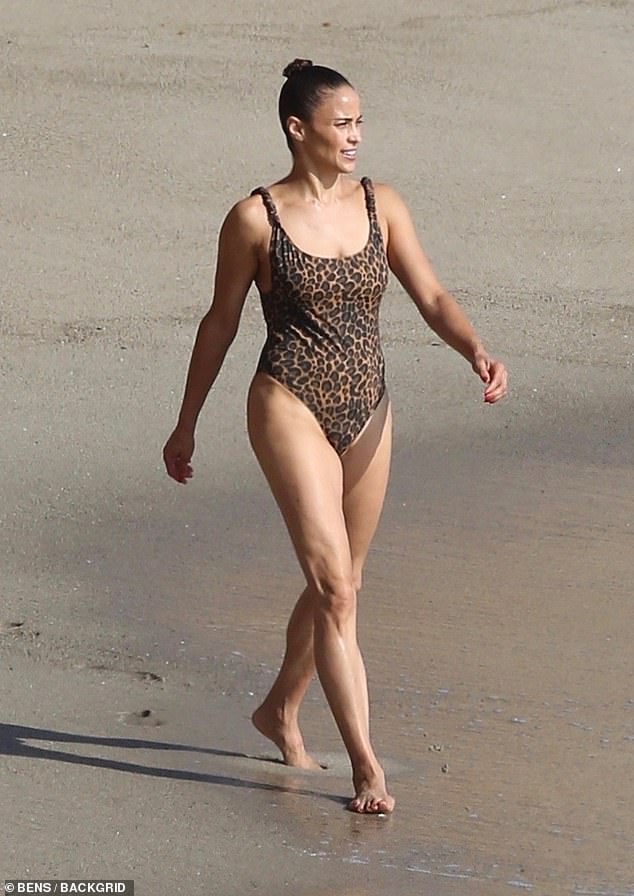 Paula Patton looked stunning as she confidently flaunted her toned beach body in a sleek leopard print one-piece swimsuit. The swimsuit, with its scoop neck and high cut on the hips, highlighted her trim physique, while the low back added a touch of elegance. She gracefully glided into the waves and was a vision of fitness as she powerfully swam freestyle strokes in the chilly Pacific waters.

During the rest of her beach day, the mother of one kicked back on the sand and got in some reading.

She was seen protecting her face from the sun with a straw hat and appeared to be reading a script of some sort.

The actress is starring in the forthcoming BET+ original legal thriller Sacrifice where she plays an entertainment lawyer navigating the lives of her rich and famous clients.

The two-hour film will serve as a backdoor pilot for the network and could get green-lit into a series.

'We are thrilled to have Paula and the talented ensemble cast join our first original film on BET+, as we continue to strengthen our commitment to quality storytelling while meeting our audience on all platforms,' said Connie Orlando, head of programming at BET Networks.

Sacrifice is one of a few upcoming projects that are set to debut on BET's new streaming network which launches this fall.

Patton has acted in films like Hitch and Mission: Impossible. However, her relationship and messy divorce from singer Robin Thicke is perhaps how she is best known.

The pair dated from the time they were teenagers in the nineties. They married in 2005 but later split in 2014 and a scandal-laden divorce followed.

Paula accused Robin of abuse and fought for sole custody of the son they share together.

Thicke made several public pleas to get back in his estranged ex-wife's good graces including recording an album titled Paula.