She is an acclaimed actress who is reprising her role as Ilsa Faust in the latest Mission Impossible film.

And Rebecca Ferguson dazzled as she stepped out at the UK premiere of Mission: Impossible- Fallout in London on Friday.

The 34-year-old actress slipped in a glittering LBD which showcased her toned legs as she posed up a storm at the premiere. 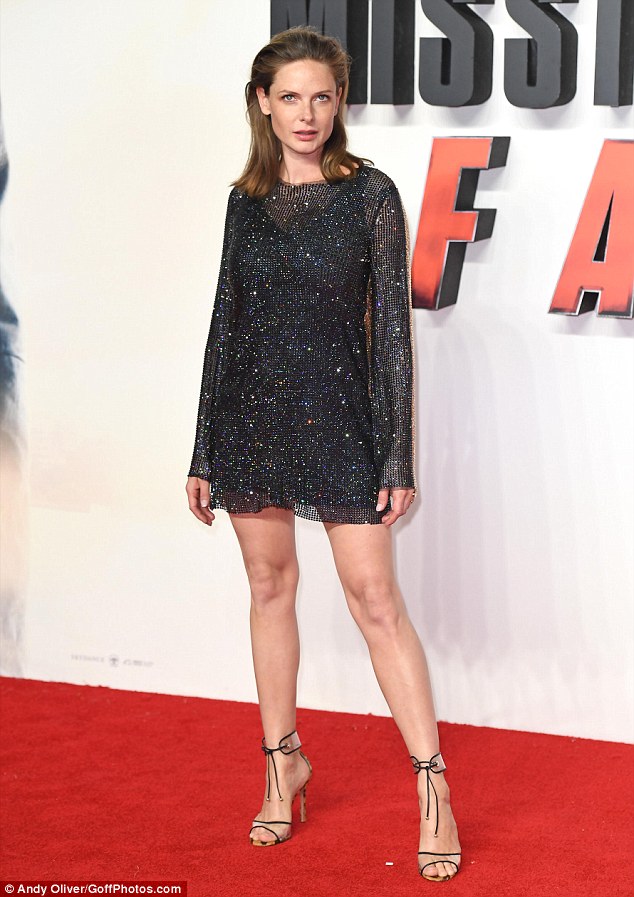 The Greatest Showman star wore her chestnut locks slicked back from her face while her stunning features were enhanced with fluttery lashes, peachy blush and a coral lipstick.

Meanwhile, lead star Tom Cruise revealed his ankle hasn't fully healed from the horrific accident he suffered on the set of MI:F during his segment with Alison Hammond on Friday's edition of This Morning.

The screen star admitted that his ankle is still broken following the stunt 11 months ago, but insisted he's gone through 'great rehab' as he's on the road to recovery.

During his interview in Paris, France, TV presenter Alison Hammond, 43, kicked off their discussion by inviting the star to talk about his stunts.

Tom - who sustained the injury after smashing into the side of a building - shared: 'Mission: Impossible – Fallout is jam-packed with action... I've been doing this my whole life, climbing on trees, breaking bones.'

'I broke an ankle, so they were concerned with running the film. Even though it's still broken, I went through great rehab.'

The Magnolia actor proved to be fully dedicated to the role, as he admitted: 'I actually flew the helicopter. Its very dangerous!'

Overwhelmed with shock, Alison asked: 'Do you think you could ever lose your life?'

The award-winning star bluntly confessed: 'Yes, but I train really hard so that won't happen. I love flying, I trained for the movie, so I enjoy it.'

Production for the film was halted for two months while Tom recovered from his injuries, though Paramount insisted the movie would still meet it's planned release date this coming summer.

'Production will go on hiatus while Tom makes a full recovery, and the film remains on schedule to open July 27, 2018.