She's already sparkled in sequins once this week when she attended the Fenty Beauty launch.

And on Thursday, Celebs Go Dating's Sarah-Jane Crawford, 34, dazzled once more, in a navy number as she arrived at the 10th anniversary screening of Keeping Up With The Kardashians at the Saatchi Gallery in London. 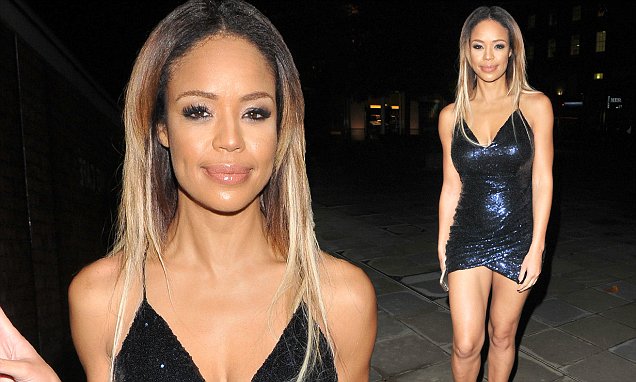 The Celeb's Go Dating star turned heads in a revealing low cut mini dress which displayed her ample cleavage and toned pins, while also risking baring too much with the high rise hemline.

Sarah-Jane was sure she was dressed to impress as she hit the London party scene with full force through her disco diva ensemble.

Opting for a sultry smoky eye, the celebrity dater, completed her look with a glossy nude lip while her ombre locks fell loose over her shoulders.

The wraparound sequin dress crossed at Sarah-Jane's legs and featured a sexy cut out at the side, clinching her already tiny waist in.

Opting to let her figure do the talking, she opted for no accessories.

Sarah-Jane attended the event alongside a whole host of stars including Gemma Collins and fellow celebrity serial dater Georgia Toffolo.

Sarah-Jane kept all eyes on her at the two-day event, in which E! celebrates the 10th Anniversary of Keeping Up With The Kardashians.

The event allows fans an incredible immersive experience, which brings to life the hugely popular docu-series

The event will run from the 22-23 of September at London's Saatchi Gallery and feature makeup master-classes and more.