People's Sexiest Man Alive 2022 Chris Evans and his girlfriend, Alba Baptista just confirmed their romance, and were seen holding hands. Just hours after news about their dating broke out, the couple, in exclusive photos obtained by Page Six, were seen stepping out in town. The Marvel star, 41, and Portuguese actress, 25, caught the eye as they stepped out for a stroll through Central Park on Thursday.

Holding on tightly to one another, Chris and Alba, walked through the crowded streets while wearing low-key ensembles with matching sunglasses and faces covered in masks. 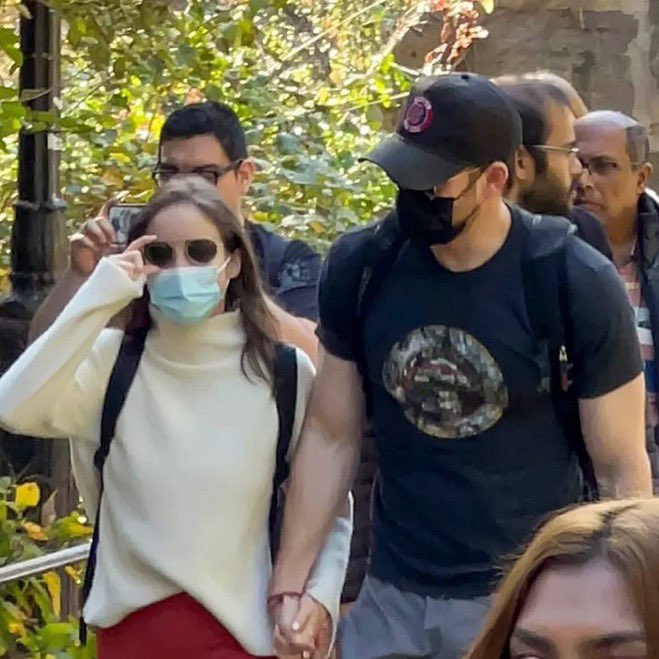 Evans was dressed in a pair of grey sweatpants styled with a black shirt and a black hat, while Baptista opted for bright red leggings and a beige turtleneck sweater.

The Captain America star and the Portuguese actress kept their heads low the moment they noticed the paparazzi.

A source told People Magazine, “They are in love and Chris has never been happier. His family and friends all adore her.”

The couple has been notoriously private about their romance, as it is said that they have been dating for a little over a year! However, earlier this week, Evans could not help keep his feelings off of social media because he left a flirty comment on the actress’s Instagram post.

Showing support to his girlfriend for her upcoming Portuguese film, A Dream In Paris, the Gray Man actor commented a clapping hands emoji and melting face emoji.