Sharon Stone’s memoir, The Beauty of Living Twice, recalls a remarkable number of brushes with death. At 14, she was nearly decapitated taming a wild horse in Pennsylvania; she suffered a stroke in 2001 and was given a one per cent chance of survival.

On screen, she’s always been much more likely to kill than be killed, playing dangerous, vampish, villainous femmes who refuse to play by men’s rules. This is what makes Catherine Tramell, the ice-pick murderess in Paul Verhoeven’s Basic Instinct (1992), her archetypal role – the one that belatedly turbo-charged Stone’s career at age 34, after years of struggling to get noticed. 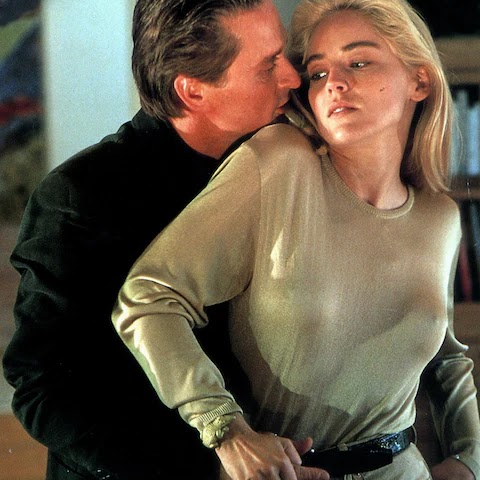 There was one particular scene that did it, making Sharon Stone into many things at once – A-list movie star for a flaring, all-too-brief half-decade, but also a simultaneous site of eyebrow-raising, never-ending scandal. Everyone knows the one – the scene that she wryly says “has given us all pause, so to speak”. Even after the box office bonanza, it helped Basic Instinct to a scorching afterlife in video rentals that few films have ever matched.

Stone sat opposite five men in a police interrogation room, uncrossed her legs for a second or so, and revealed no underwear. The actual shot lasts about four frames, or a sixth of a second, with the gulping reaction of Wayne Knight’s cop underlining what we may or may not have seen. (Knight, starting to be known at the time as Newman in Seinfeld, has the scene to thank for Spielberg casting him in Jurassic Park, with the following iron-clad logic the director sent to his agent: “I see him in close-ups, sweating, only instead of open legs, it’s a dinosaur.”)

Standing out even against the uninhibited trashiness of Basic Instinct in general, the revealing of Stone’s crotch announced a brazen sexual confidence which no other actress in Hollywood would have risked at the time – none of the many, including Michelle Pfeiffer, Demi Moore and Julia Roberts, who were considered for the role before Stone, who says she was the 13th choice.

The only problem with this narrative – one of picking her moment to make a stir with the same cool intent as her character – is that Stone completely rejects it. “There have been many points of view on this topic,” she writes in the memoir, “but since I’m the one with the vagina in question, let me say: the other points of view are bull____.”

Everyone agrees on one thing, at least: it was Verhoeven’s idea. Much to the consistent annoyance of screenwriter Joe Eszterhas, who feels the film was overshadowed by the notoriety of one shot for which he cannot take credit, there was nothing in his script about Catherine going commando.

Verhoeven remembers going to a party in 1960s Holland, and meeting a beautiful blonde who was clearly wearing nothing under her dress. “You know, we can see your vagina,” his buddy went up to say. “Of course,” she replied. “That’s the reason I do it.”

By the director’s account, he sold the scene to Stone in exactly this way. She says it happened very differently. On set, with just Verhoeven and cinematographer Jan de Bont in the room after the other actors had finished their shots, Verhoeven came to her with what she says he spun as a specific technical request. “We can’t see anything – I just need you to remove your panties, as the white is reflecting the light.”

Demi Moore wasn’t just going to sit around and watch Stone become the bare-all A-lister getting all the work. She weaponised her own physique in the likes of Disclosure (1994) and Striptease (1996), where in the latter case a vast amount of the film’s pre-publicity focused doggedly on her breast augmentation specially for the role.

Even Moore’s then-husband Bruce Willis got in on the frolics, with an underwater flash of genitalia in the bedraggled therapy-group whodunit Color of Night (1994). After all the brouhaha over a knickerless Stone, the scramble to pause that one on VHS may not have been quite so enthusiastic.

Eszterhas and Verhoeven patched things up over dinner, at the Beverly Hills branch of the Ivy, where Verhoeven remembers the writer graciously saying he’d been correct to ignore the pressure groups and made the full-tilt, maximally crass Basic Instinct he’d wanted to make. They drank, they laughed, they resumed their friendship and swapped ideas. “How about a musical about Las Vegas?”, Eszterhas pitched, as Verhoeven’s eyes lit up.