In another story, the vampire family that slays together may have stayed together.

But in the Nov. 13 finale of AMC’s “Interview With the Vampire,” betrayal flowed as thick as blood as Louis (Jacob Anderson) and Claudia (Bailey Bass) double-crossed Lestat (Sam Reid) during the family’s grand and gruesome goodbye to New Orleans – by way of a Mardi Gras massacre.

Fans of Anne Rice’s book on which the series is based knew the betrayal was inevitable, but they were probably just as shocked as Lestat to see that, in this adaptation, it was Louis (not Claudia) who slid the knife across his incapacitated partner’s throat in the end.

“I think he accepts that Louis is going to kill him, and understands, very much in that last moment, that he needs to do this,” Reid tells Variety. “Where he is right now is a very dark, fucked-up place, and you sort of need this iteration of him to die.” 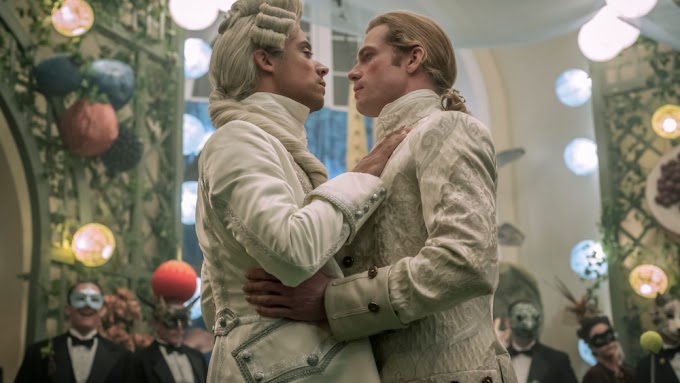 Louis’ role in Lestat’s “death,” while small compared to Claudia’s expertly executed deception, marks a significant departure from Rice’s book. In the 1976 classic, Claudia carries out the entire plan, from tricking Lestat into ingesting blood laced with laudanum and arsenic to slicing his throat.

Series creator Rolin Jones says that by wholeheartedly embracing the undeniable romance between Louis and Lestat, it seemed only right that love would be what brings him down – for now.

“For Lestat, his love language is murder,” Jones says. “So who else should it be than [Louis]?”

But for all the tragic poetry of the moment, Louis’ move isn’t fatal. As he detailed for interviewer Molloy (Eric Bogosian) during his present-day conversation at the beginning of the episode, merely letting a vampire bleed out doesn’t kill them. They have to be beheaded, burned or drink the blood of the dead.

Anderson defends Louis’ restraint by acknowledging the plan was always to buy time for him and Claudia to escape. But he admits that buried under that justification is Louis’ unwillingness to accept what severing ties with his maker means.

“To kill him would be to kill a part of himself, and a significant part of who he has become,” Anderson says.

Luckily, the show doesn’t ask audiences to pretend Lestat is gone forever. Although lifeless, his body is disposed of in a landfill, where he is last seen feasting on rats to regain his strength.

“It would be sort of a boring cliffhanger to leave the show on, because you know Lestat is coming back,” Reid says.

Instead, the final twist unfolds in present-day Dubai, where Molloy calls into question his nocturnal interview subject’s version of Lestat’s death, choosing to poke at the still-raw nerve that is Louis’ guilt.

For a moment, Molloy believes he finally has the upper hand on Louis, until the vampire’s trusted right-hand man, Rashid (Assad Zaman), steps in and reveals himself to be Armand, the famous character from Rice’s books who plays a major role in the next part of the story.

Jones admits the show owes audiences answers to who Armand is, considering those unfamiliar with the books will likely not recognize the significance of the moment, other than the fact that Louis’ final words refer to the 514-year-old vampire as “the love of my life.”

“That story is owed, and it’s one we will tell,” Jones promises.

Until then, viewers are left to wonder what Louis has gotten himself into by seemingly trading one powerful partner for another — this one so advanced in age and power he can walk in the sun and fly.

For Anderson, the most intriguing question coming off the finale is what influence Armand has had on Louis between his time with Lestat until the man we see Molloy interviewing in 2022.

Jones confirms the series will cover Rice’s book “Interview With the Vampire,” the first in the vast “Vampire Chronicles” series, across 15 episodes. The remaining eight episodes will comprise Part 2, which has already been ordered by AMC as part of its burgeoning Immortal Universe built around 18 of Rice’s acquired works. The franchise’s second series, “Mayfair Witches,” will premiere on AMC and AMC+ on Jan. 8.

“Going forward, we are going to do things that are wildly loyal, and really try to squeeze out every beautiful piece of prose in that second half of the book — and we are going to do some other things the book didn’t do, mostly based on where the books go from here,” Jones says. “Books 2, 3 and 6 really inform all the decisions we made in Season 1, and a lot of the decisions we are making in Season 2.”

No matter how divergent the series is from the source material, Lestat’s excision from Louis’ life is undeniably monumental and ushers in a new era for Part 2, as Louis and Claudia head for Paris.

For that reason, Anderson says he was overcome with emotion when it finally came time to film the pivotal death scene that kicks it all off.

“I was a mess,” he says. “I cried my eyes out… I’m not a method actor, I want to be conscious of what I’m doing. But I kind of lost myself in those scenes. I got very freaked out by the idea of it all ending, and also doing this to Sam — because it means this dynamic is going to change next year. It’s going to be different. It kind of had to be done at my hand, and that was heartbreaking.”

Before that moment, though, Anderson and Reid both say they had a blast filming the extended massacre sequence set during the feverish final hours of 1930s Mardi Gras. Shot over several weeks, they kept returning to the dizzying amount of death, and grew fond of the catharsis it unleashed in their characters and themselves — so much so that Reid took his blood-stained costume home.

“God knows why, maybe because I’m so attached to it,” he says. “I was constantly going back into it with the blood put all over me.”

Throughout the finale, audiences likely felt seduced into pondering whether Louis and Lestat could actually work after all, especially when they make a dangerously romantic public declaration of their love.

During the lavish masquerade ball the couple and Claudia use to recruit victims for their send-off slaying, Louis and Lestat decide to scandalize their city one final time by sharing a beautifully executed dance and a kiss in front of a shocked crowd.

“They are not outing themselves as vampires, but they are being open about their relationship,” Anderson says. “It is this grand pronouncement of love, but it is a mutual one. There are a lot of things going on underneath it. There’s Louis guilt, there’s Lestat knowing he’s going to die. But I think that, in this brief moment, it is just the two of them — and it feels like when it was good.”

With the series set in the first half of the 20th century rather than the book’s 1800s framework, Louis and Claudia are set to arrive in an Eastern Europe in the grip of World War II, a moment in history that demanded the world take stock of its humanity.

“That sets up what Paris is all about,” Jones says. “Remaking yourself, and a second — or, in this case — a third act for our vampires. Can you put behind you questionable decisions and start anew, and become the person that you want to be? They go through something in Eastern Europe that could — for vampires that aren’t as strong — have been the end.”

Whether Lestat will follow them is likely to loom large over Part 2, and Reid is confident the complicated vampire won’t have lost his edge when he does reappear.