Attendees at the star-studded Met Gala are privy to a spectacular setting among priceless works of art, A-list entertainment, impeccable decor, and a tasty multi-course meal.

The entire exclusive event, in fact, takes Anna Wintour and co. a year to plan — yet it seems that many of the hottest stars are much happier to plop down and smoke on the bathroom floor. 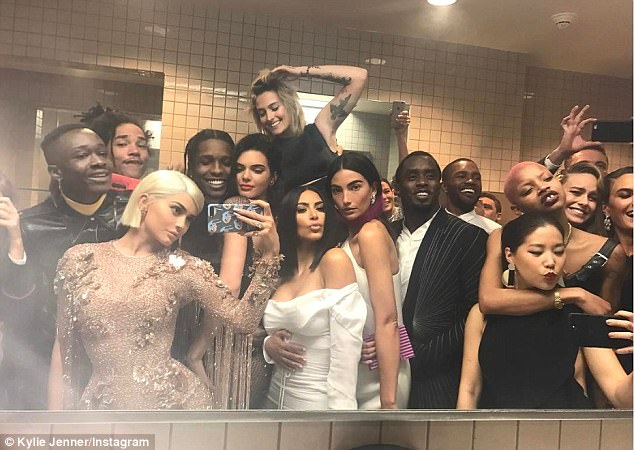 In behind-the-scenes pictures and videos taken by guests, it's clear that the place to be on Monday night was inside the restroom of the Metropolitan Museum of Art, where stars like Kendall Jenner, Bella Hadid, and Behati Prinsloo schmoozed, took selfies, and even smoked a few cigarettes.

Kylie Jenner shared one of the most-liked bathroom snaps of the night, taking a group selfie with some of the crowd camped out in front of the mirrors.

Ashton Sanders, Luka Sabbat, and Slick Woods were also in the picture.

Brie re-posted the picture on her own Instagram account, joking about her appearance in the infamous selfie, saying: 'I needed to go the bathroom and ended up famous.'

In other iterations of the photo that have popped up online, Michelle Monaghan can also be seen.

Those massive group shots certainly weren't the only social snap of the night, however: Many attendees were happy to flout the no-social-media policy instituted by host Anna Wintour.

In fact, designer Prabal Gurung showed how crowded the tiled room really was with a video he shared Tuesday morning.

The clip, which has been viewed over a million times so far, starts on a shot of Hailey Baldwin, Taylor Hill, and new mom Behati Prinsloo — the latter of whom is smoking a cigarette.

In fact, several stars were seen smoking in the bathroom over the course of the night, brazenly defying New York's indoor smoking ban.

Prabal's camera also pans to a large crowd of people standing around and talking in their tuxedos and glitzy designer dresses.

Vanity Fair editor and celebrity hob-nobber Derek Blasberg holds up his own camera, while Deepika Padukone poses for a second with Prabal himself. In another video, Emily Ratajkowski joins the duo, and more stars can be seen milling about behind them.

Prabal's first video also captures another man with a cigarette, Mary J. Blige reaching for the sinks, and singer Grimes keeping her head down and smiling uncomfortably as she tries to do her business and get out of there.